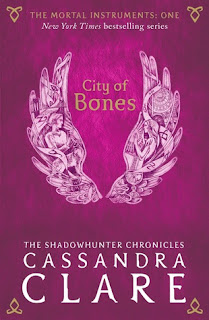 Wow, this was way worse than I remembered it being.

This series and this book hold a special place in my heart. It was the thing that got me back into reading, after essentially only reading assigned books during high school. It was fun and intense and I really liked it.

That was 2 years ago and oh boy have things changed.

Maybe I'm a new person. Maybe my 2 years of vigorous reading have altered my literary priorities. Whatever the reason, I found this to be very poorly written, with awkward pacing and inconsistent characterization. Clary's convictions and opinions fluctuate scene by scene; the only consistent idea she has is that Jace is hot. And speaking of Jace, his behavior makes absolutely no sense!! Their "love story" is built on him quoting Wikipedia and standing next to her. That's not romantic in the slightest.

Isabelle's character felt contrived and like Clare was trying too hard to make a hardcore femme fatale, which made the fact that she's Clary age (15/16) stand out even more. Alec was alright, but his change of heart comes out of nowhere. Simon was the only character I still liked by the end of things.

The whole storyline with the vampires makes no sense in the long run, or even within the story itself. It's only set up for what happens to Simon later on. It goes against a lot of the themes this is trying to say. Why would Clary suddenly decide that Downworlders aren't horrible when 1) her first instinct is that they are freaky and 2) the only interactions she has had with them have proven either uncomfortable, unhelpful, or potentially fatal?? The only thing I can think of is that she likes Luke, so they're all okay?

Also, Valentine being simultaneously slim and thicc is incongruous and only puts this image in my mind: