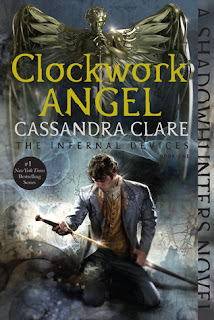 For those of you who have already read The Mortal Instruments and liked it, I suppose reading Clockwork Angel will be a somewhat pleasant, somewhat unpleasant deja vu. For starters, it involves a girl from New York who is introduced to the Shadowhunters by a hot headed, obvious love-interest Herondale. Doesn't exactly prove Cassandra Clare's versatility, does it?

The world building that Clare crafted throughout all six books of TMI never seemed too rushed, though I admit it got rather exposition-y at times; whereas, Will Herondale literally hands Tessa a book of Shadow World 101 that she spews verbatim at the reader only a few chapters in. Besides that, the plot didn't really stand on it's own. I know Clare was a fan fiction writer before writing TMI, but making a fan fiction out of your own story? It's just a City of Bones copy that got a period piece twist. It wasn't until more than half way through, when the clockwork automatons became important, that it differed significantly at all. The robots were undoubtedly the coolest and most original part of the story.

The character introductions seemed forced sometimes too, because everyone treated Will like he was an awful person, even Tessa sometimes, when up until that point, he hadn't actually done anything to justify that. His first rude thing was leaving Tessa alone when she didn't know how to navigate the Institute because she had been attempting to pry into his past when obviously he has a tragic backstory. I felt like Tessa was more of a jerk than he was at that point. Granted, later on he does do some pretty mean things, but Tessa already had formed an unjustified opinion of him. Mortmain was obviously the bad guy at his first appearance and he wasn't even an interesting or fearsome villain like Valentine. He just gave me the feeling of the orphanage "caretakers" from Oliver Twist: oily kind of people in stiff collars. In general, the plot was predictable. I was rarely surprised and was far more often annoyed with the characters' blindness and stupidity.

Overall, I liked it enough, but significantly less than TMI, which is disappointing because so many people recommended it, many of which regarded it higher than TMI. I'll still finish the trilogy though. I'm in too deep. No turning back now.