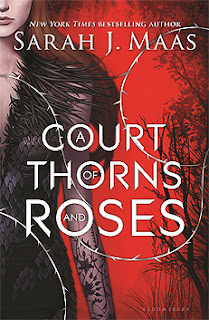 
Me to Sarah J Maas:

"Do you lie awake at night to come up with all your witty replies for the following day?"

Oh dear, this is awful.

The title of this book is stupid. It's stupid and flashy and unrelated to the actual content of the book. It's solely for the ~wow~ factor. The quotable line, "I love you... Thorns and all" is wholly ineffective because "thorns" had not been established as a motif and was only used in that context in that very scene, more than halfway through the book. The word "thorn" was only used a grand total of 9 times in this book. The original Beauty and the Beast story had established rose motifs—you can't borrow good writing, even for a retelling. That's just lazy.

The writing itself was inconsistent and poorly done.

I pushed and pulled, but the mud was too slick, and held fast.

Besides that, Amarantha's hair drastically changed color after about 90 pages:

Which is it, Maas? It can't be both unless she has unmentioned magical hair dyeing abilities.

The atmosphere and the opening chapter were excellent and I was intrigued by the idea that was offered me, but the actual book did not deliver at all.

This next point is a spoiler, but because I am disgusted with Sarah J Maas for including this, I am not going to mark it as such, since everyone should know what kind of morals this book is supporting before they read it especially when they are as filthy and vulgar as this was.

The attempted rape of Feyre by Tamlin was brushed off as no more than a mere romantic, steamy encounter to further their lukewarm love story. The only conclusions I can logically draw from this are all rather victim blamey, tbh—she was warned several times to stay inside with the doors locked until dawn, but she leaves her room not once but twice before dawn because she ~wants to go to the party~ and then later, after she almost gets gang-raped and is saved and then creeped out by Rhysand the sociopath, she thinks she is totally safe to go eat a bunch of cookies because, well the drums stopped, so it's probably okay now, and then she gets sexually assaulted by Tamlin, who was still high with lust magic.

I was about to pass out when he grabbed me, so fast I didn't see anything until he had me pinned against the wall.

I [pushed] him away. He grabbed my hands again and bit my neck. I cried out as his teeth clamped onto the tender spot where my neck met my shoulder. I couldn't move—I couldn't think.

Before, during and after the attack, she's thinking, Wow, he's really hot. I'm kinda uncomfortable with this, but I guess it's okay that he's drunk on lust magic, because I wanted to sleep with him anyway. That is a very wrong and dangerous way of thinking. No matter what, it is never okay for anyone to make someone else sexually uncomfortable or afraid, especially when they've given verbal disapproval. This entire scene left a bad taste in my mouth.

And then there's Rhysand's behavior. He repeatedly violates her personal space and comfort, drugging her and forcing her to "dance" for him in front of a large crowd for weeks on end after stripping her all but naked. Like all Fae males, apparently, he using brute force to get her to comply with his sexual wishes.

"But he didn't actually touch her; he kept his hands just on her waist!" you say. Yeah, but did she say he could touch her at all? Did she actively encourage him to touch her? No, she did not.

I pulled away, but his hands were like shackles.

I would not have such an issue with this if Sarah J Maas didn't give the impression that she supports such behavior. That is what I find unconsciable.

Besides that, the plot made no sense, even after exposition-Alis gave us the lowdown—in fact, it almost made less sense then. It was cheesy and cliché and frankly, boring. The "riddle" was extremely easy and only proved that Feyre is an absolute idiot with no logical abilities, as I was able to figure it out before Amarantha had even finished saying it, and I'm notoriously bad at riddles.

The sex scenes were almost Empire of Storms levels of bad, cringey, and gross. I think Sarah J Maas doesn't know what YA means and isn't aware she's actually writing for NA.

The Fae were, for one thing, almost exactly the same (primarily in appearance and personality) to the ones in the Throne of Glass series, and tbh I was disappointed. They're not even cleverly unique faeries. They're just Tolkien-esque elves that are actually vampires: fangs and biting, immortality, aetherial beauty, animalistic tendencies, superiority complex. They don't have any distinct differences from humans in their thought processes or emotional capacities—only the same degree of variety that exists in humans.

The religious system and creation story was very interesting and I really liked that aspect.

Faerie aka Belle: Sarah J Maas decided to try something new and have a first person fixed perspective, but it didn't really work, because Feyre was a bland complacent character without much substance passed the surface level, and most of the interesting action took place where she couldn't see it. She suffered, like Celaena did in Crown of Midnight, from what I call Nehemia syndrome: the character that the MC has grown to trust, despite obvious suspicious behavior, turns out to be manipulative, and yet the MC completely overlooks that fact in favor of idolization of their lying friend. In this case, everyone in Prythian is keeping secrets from her and after almost getting her questions answered by the Suriel, Feyre decides to "Stay with the High Lord. He will keep you safe." and just completely forgets that she wants answers about the blight. Also, whereas Belle left the Beast in the original story because her father was in mortal danger, in this book, Feyre leaves because Tamlin impies that she's gonna get ganked by Rhys or Amarantha, the evil Faerie Queen. She is not an active protagonist. Also, her painting skills aren't a part of her characterization; it just feels tacked on to make her ~cool~ and ~unique~

Tampon aka the Beast: I don't even care about this guy tbh. He's a confusing character who just feels like a Chaol-Rowan merge on steroids. He's violent, obsessive, and abusive, but also sweet, understanding, and caring, because that's not a contradiction. There's a difference between a complex character and a poorly written character.

Lucien aka Lumiere/Cogsworth (his steampunk eye suggests Cogsworth but his personality suggests Lumiere): So apparently he "hates" Feyre even though I almost shipped them more since they consistently had better chemistry than her and Tammy, and that's saying a lot, because they didn't have chemistry.

exposition-Alis aka Mrs Potts: She was okay. Just okay. She was fine.

Reese's Cups aka also the Beast and kinda Gaston too: Is he supposed to be her love interest for the rest of the series or something, because the fan art definitely suggests that, but, uh, did everyone forget that he's a dangerous sociopath with a history of violence?? He has no regard for her emotional well-being and sees her body as literally nothing passed a sexual plaything. He's a horrible person.

Amarantha: Why did there have to be a "big bad evil Faerie Queen" in this at all? There's already one in the Throne of Glass series and I can only take so much female-against-female hate from a supposedly feminist fantasy writer. Amarantha was bland and predictable, and her motivations were extremely surface-level.

Her fam: Nesta was like, supposed to have some kind of implied character arc but lol it wasn't very good. Elain was nice and I liked her. The dad was okay, I guess. Pretty forgettable tbh

Isaac Hale aka fake-out Gaston: This character wasn't important at all, but I just wanted to say that I think this is the dumbest name choice in a high fantasy book that I've ever seen. Isaac Hale?? Really, Sarah J Maas? Really? That's the Jason of fantasy names. This is a the-guy-who-went-to-high-school-with-my-older-sister kind of name. It's not a fantasy name.

While I managed to read it fairly quickly, I had to dnf it for several days before deciding to trudge through. It was horrendous. I may pick up the sequel at some point, idk, but for now, from what I predict and understand from various spoilers I've encountered on the internet, I don't really care about this series very much. Frankly, it's not good.